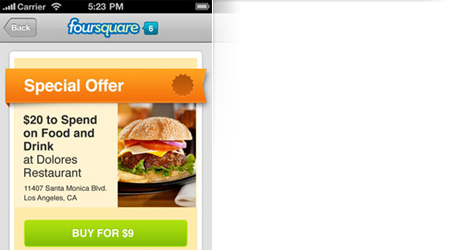 Neiman Marcus on September 29 announced an unusual-sounding Foursquare marketing campaign. The chain hid cards giving away 15 $1,000 handbags (Nancy Gonzalez clutches, to be precise) in its stores and used Foursquare to reveal a clue to help shoppers find the product. A statement the chain issued said the system would "indicate whether the user is in the vicinity of a hidden clutch." But in actual fact, the system didn't know anything beyond the fact that the consumer had entered a particular store.

It then offered a clue. For a store in Ft. Worth, Texas, for example, the tease said: "It may be a Full House but we are convinced you will go bananas for this bag. Find it and win the bag." The promotion couldn't really indicate how close the customer was to the gift, because Foursquare's GPS signal typically ends the instant the customer enters the building. Neiman Marcus couldn't go any farther, "because of our infrastructure. We'd need to have sensors all over the store," said Jean Scheidnes, the chain's manager of social media. But what if a chain did deploy such a network of in-store sensors? The potential could go way beyond fun and games.

Instead of having one clue, which would either send customers to the right place or not, you could have a series of clues sending the presumably-not-time-starved customers along a path that would coincidentally be proximate to the highest margin items in the store.

Given the individual nature of a mobile device, the routes (all of which end up in the same 15 places) could be varied based on the customer profile. In other words, it might be more profitable to send one customer through sporting goods and a different customer through apparel. Barcodes scanned en route would display information and hints. But it would also provide clean ROI data about what products the customers thought about during the trip.

In short, the potential of mobile coupled with in-store sensors could take customer marketing five orders of magnitude into the future. Many chains are already enabling consumers to ride on the store's Wi-Fi network, so the security and cost issues of additional sensors is hardly huge. Without sensors, the store is one big mobile black hole.